Being broke, depressed, and armed only with a computer that was barely hitting the threshold of "capable" in 2015, I didn't play many games released this past year. Hell, I can count them on one hand. On top of that, I only beat two of these "recent" releases.

This is one of those two games.

Hypnospace Outlaw bills itself as a "1999 Internet Simulator".It's probably best described as a puzzle/adventure game set in pre-y2k cyberspace. Or uh, "Hypnospace". The game takes place in an alternate timeline in which the Internet is accessed through headbands worn while sleeping, which makes it a "dream-internet". 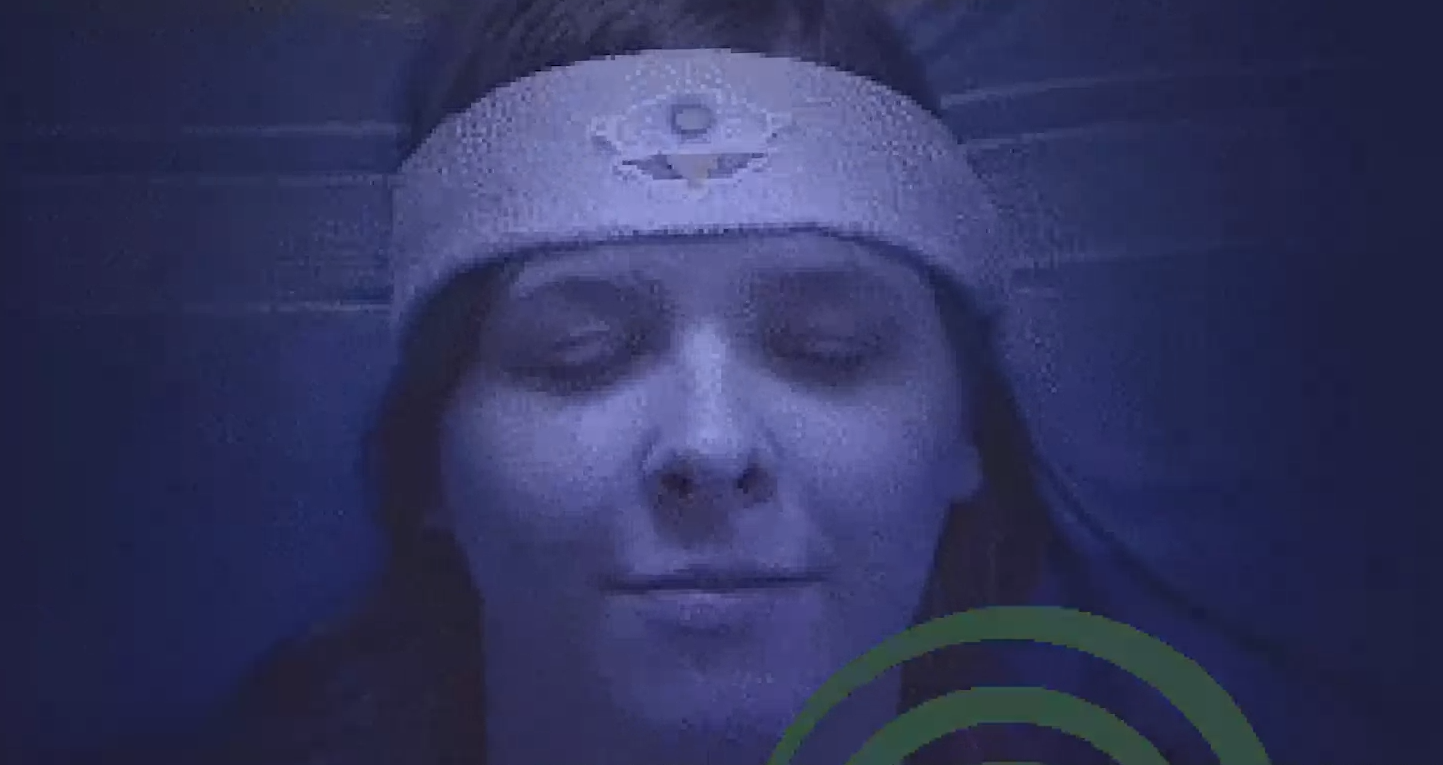 This is my worst nightmare.

Hypnospace is similar to AOL in that it's a community tied to a particular ISP (the corporation in charge of Hypnospace is MerchantSoft), which isn't able to access other sleep computing networks. It's also similar to Geocities in that the entire thing is divided into Zones based on a particular page's subject matter or the creator's age or interests.

You, the player, take on the role of an Enforcer - a volunteer moderator of Hypnospace, so to speak. You are equipped with an Enforcer headband, which means that the player cannot create a homepage (within the game, at least) or use the in-universe chat client, "Chit-Chat". Your main goal is to remove content and users in violation of Hypnospace Law, represented by the acronym "C.H.I.M.E.".

These are mostly self explanatory, save for extralegal commerce - Hypnospace uses a proprietary currency, HypnoCoin, which can be earned in a variety of ways, but notably cannot be exchanged for real money. Any other payment system is prohibited. Sorry, BitCoin fans!

Enforcers are given access to a special dashboard as well, containing emails and case files. These case files are the meat of the game. Users report C.H.I.M.E. violations (or companies do, in the case of copyright infringement), you're tasked with finding a set number of violations and, if the player deems it necessary, flagging a user for racking up too many violation points. Emphasis on "if the player deems it" - in my playthrough, I flagged a user only once. In addition to the set number of violations, there's usually more that are happening, usually within the same Zone. Finding these awards extra HypnoCoin. I'm a fan of this scrap of freedom in problem solving, particularly in the flagging department.

Most of the time during these assignments are spent browsing pages in whatever Zone you're supposed to be looking in. For instance, the first case in the game is a copyright infringement case involving an in-universe old timey cartoon character known as Gumshoe Gooper. You're supposed to remove any and all images of him, even if it's a child's drawing. The Zone this takes place in is comprised of older users - if the game didn't take place in 1999, I'd call 'em boomers. Nonetheless, they become about as outraged as today's boomers would, thinking that Hypnospace has some sort of vendetta against old cartoons and America and freedom and all that shit. This launches an entire subplot where all these old folks organize to STAND WITH GOOPER.

Watching life go by online on these pages is the most entertaining part of the game, in my opinion. If you get really into the game, like I did, you begin to sort of feel for the people behind the headband. Er, wearing the headband. Not to mention, these pages are pretty authentic to the old school Geocities experience - tacky graphics abound, autoplay music on every page. Silly scams, viruses, and hoaxes litter this dream world, as well. One particularly touching page is a memorial for an older gentleman's late wife - "See you soon," he writes. Some of the most amusing pages are in Teentopia, where teenage boys try way too hard to impress and "be cool" for others. There are even squabbles between users, which mostly take place in the Coolpunk and, of course, Teentopia zones. 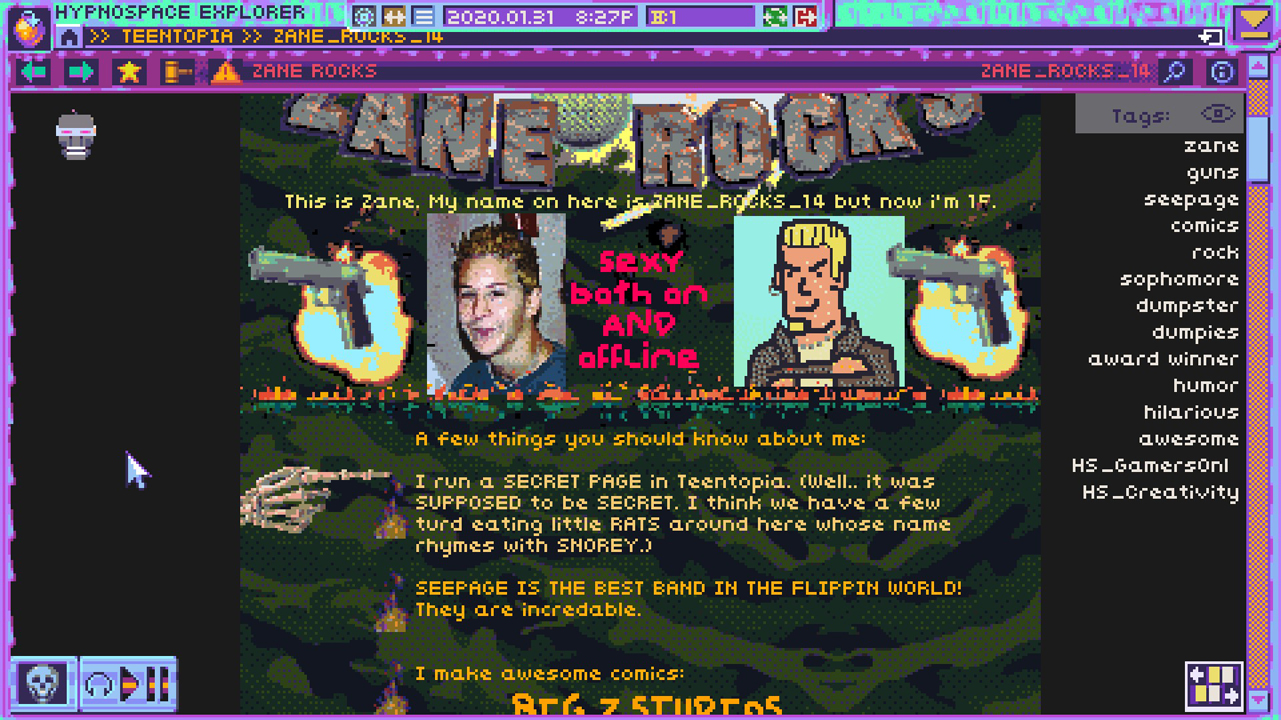 Most of the characters in the game have amusing personalities, ranging from quite helpful... 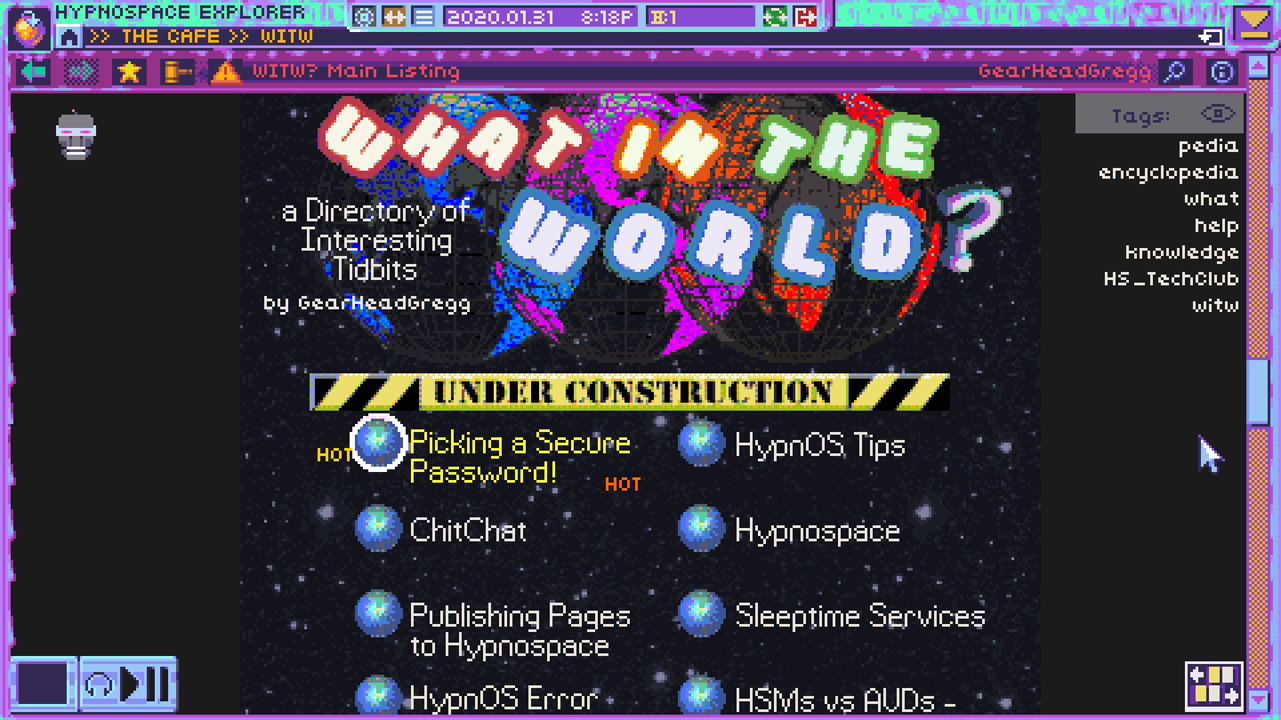 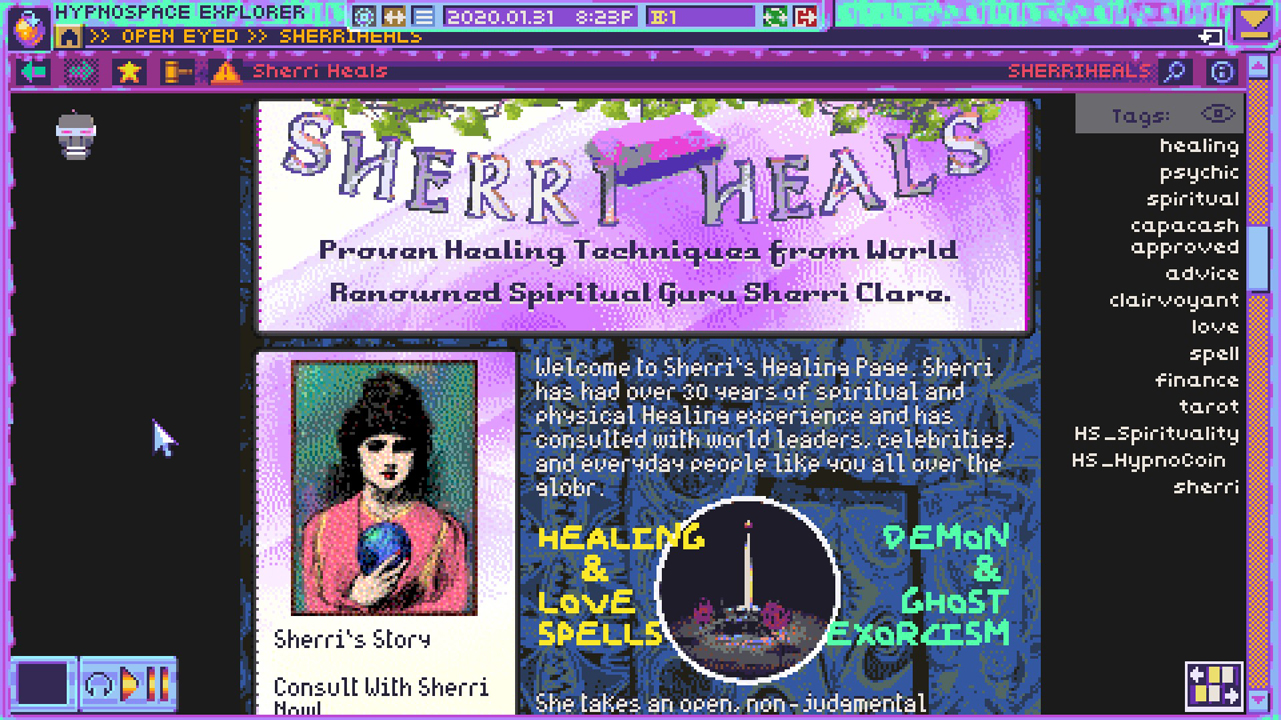 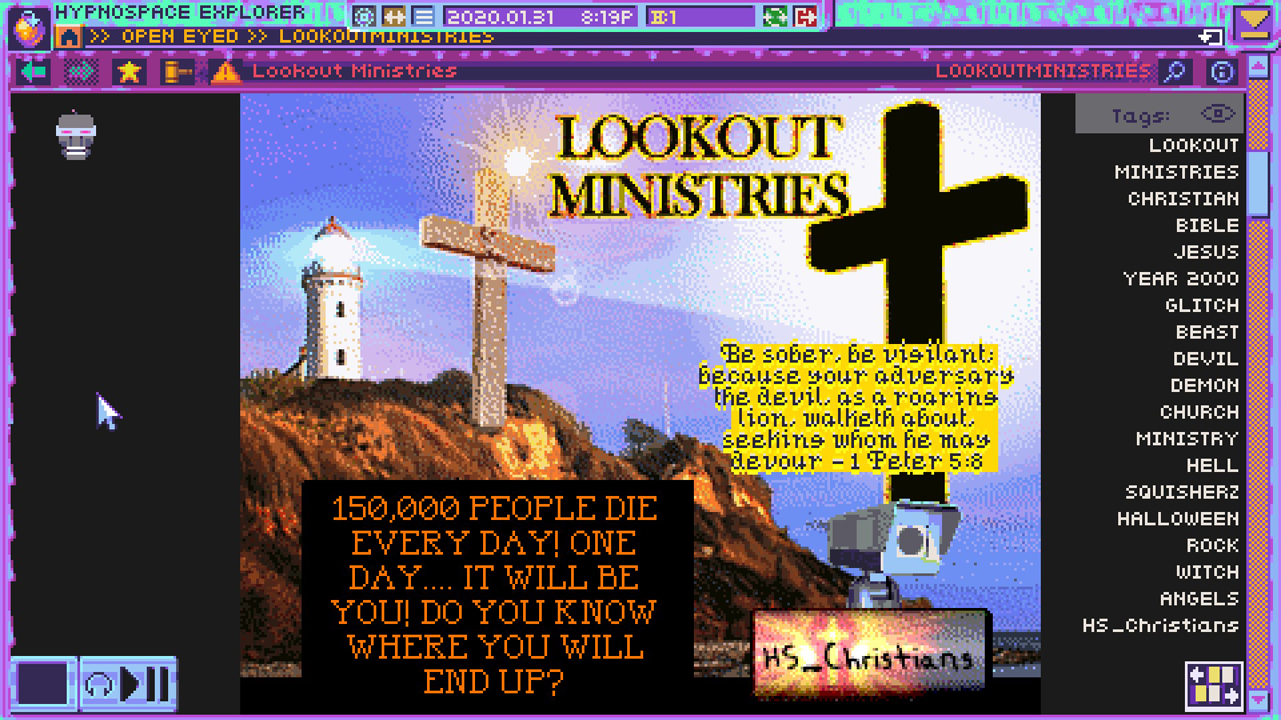 Hell, even the MerchantSoft employees are really fucking funny.

Since Hypnospace Outlaw takes place in an alternate reality, Hypnospace has developed its own lexicon - there's no LOL, there's BWL instead. (That's "bursting with laughter".) Instead of creepypasta, there's "Scaries", which are accompanied with user made images. The world has even developed alternative versions of today's sports - you're not reading tennis scores, you're reading TRENNIS scores! (If you can make any sense out of how trennis is played, you're smarter than I am.) There's a Pokemon clone by the name of "Squisherz" (there's even a brief moment of satanic panic about it) and there's a very, uh, complex evolution of music in Hypnospace Outlaw's world. There's a page explaining it, but it gave me a headache. Even without that page, you quickly learn the current trend is "Coolpunk", which is an obvious parody of Vaporwave. It's based on the antics and commercial jingles of a Kid Rock-esque figure known as "The Chowder Man" who is way cooler than Kid Rock in every single concievable way. Oh, and naturally, there are those who declare Coolpunk dead, and create new genres... 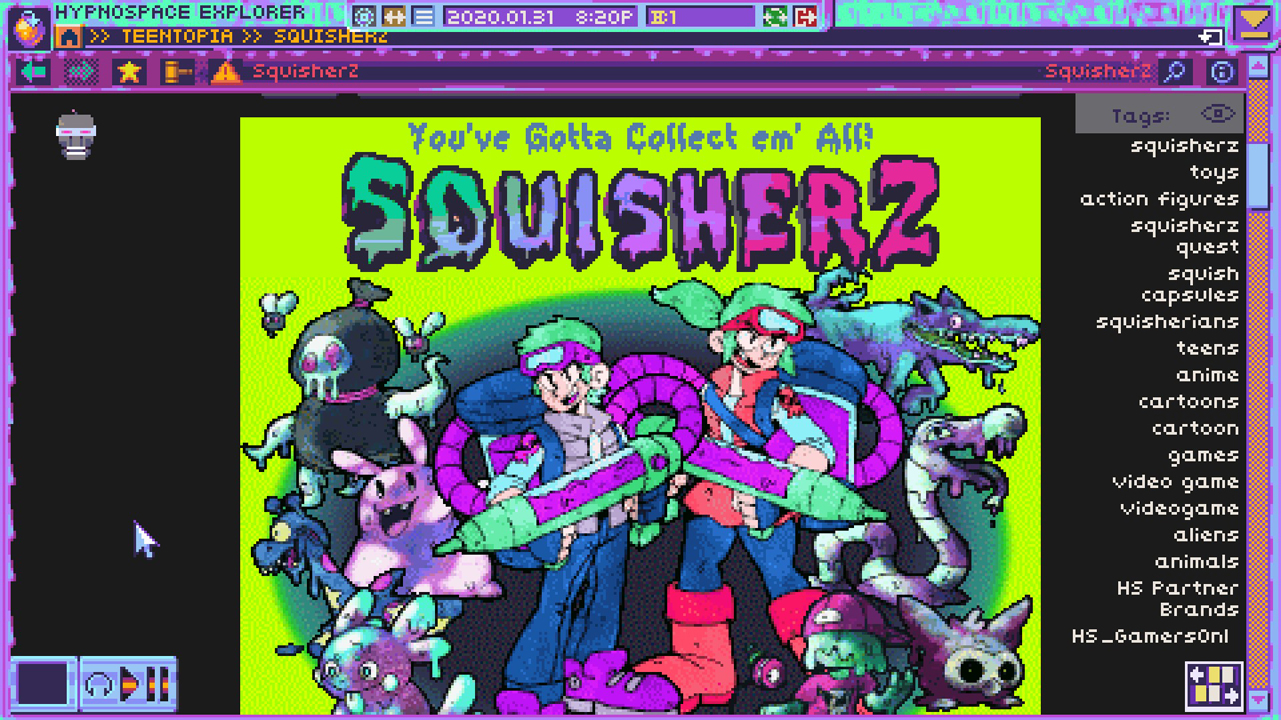 Looks pretty devilish to me.

Even Nu Metal gets a little nod.

The graphical and sound quality just add to the experience. The Nu Metal parody I linked is compressed to hell and back, and the rest of the music is almost all MIDI, save for some of the albums you can find or buy. Any and all images, if you haven't noticed, have this fuzzy, oatmeal-like quality (I wonder what the file type for a HypnoSpace image is?) that heightens the dreamlike experience.

In fact, the game takes great pains to emulate a desktop environment. Prior to a recent update, the Steam overlay was disabled. Oh, and as the player will soon find out, the headbands are prone to crashing. There's some sort of memory leak issue with the music that causes the game to start stuttering, although players thought it was just part of the simulation of a late 1990's computer, especially since - in most reports - the bug got worse after a particular software update in-game, and restarting the game fixed it temporarily. Alas, developer Jay Tholen confirmed it was a bug.

Hypnospace Outlaw isn't without criticism of the entire Enforcer system. There's a case regarding extralegal commerce where the removal of the real-world money payment system on one particular page is met with the owner begging for the Enforcers not to do it again, as this is the only way she can pay her rent. Even removing the Gooper fanart feels really mean on the player's part - they were drawn by little kids who didn't know any better! Of course, you are given the option to NOT push these things to an extreme, so you can just be a simple douchebag, and not an absolute power-tripping dickhead. It doesn't go that far into the ethics of moderation so much as it goes into criticizing Hypnospace's impending commercialization and MerchantSoft itself. I won't lay it out here for you, since it's mostly spoilers.

The only thing to really tarnish this is that the climax of the game happens VERY abruptly. Even without that, it's an extremely jarring moment, both in good ways and bad ways, for reasons I won't explain because once again, spoilers. The other issue I could think of is that there are sections, particularly in the final bits of the game, where getting where you need to go may be a bit difficult for some players (the less I say about Freelands navigation, the better...), but there is an in-game hint page that takes HypnoCoin.

One last thing - the game recently updated to add achievements AND allow modding. I wrote the majority of this review before this update went live, so I haven't really explored it, but it sounds interesting.

So, would I recommend HypnoSpace Outlaw? Yes, particularly to the nostalgic. Maybe even to the not-so-nostalgic, just for the world contained within the game. I mean, I personally a lot of fond memories of the early period of the Internet, despite coming around at the tail end of it. I'd be lying through my teeth if I said I didn't miss the less commercially controlled web. After all, if I didn't, I wouldn't have a Neocities, would I?